I watch three black swans winging their way through the quiet cul-de-sac where we lay at anchor in Iola Bay. The sound of their slowly flapping wings carries clearly across the evening-stilled water. The shrill cries of a heron ring out and seem to echo off the rock-lined shore that enfolds us. The towering rocky crags of Mount Rugby just a mile north of us across Bathurst Channel, catch the last rays of sun. There is not one sign of humans or human habitation anywhere around us. The only visible hint of trails in this wilderness area turn out to be the tracks made by wombats scrambling through the thick, rough brush looking for something, anything, to eat. I am lounging comfortably in the cockpit, feeling repleat – the reason? We have reached our goal. We are now on the wild west coast of Tasmania in a magnificent, rugged multi-armed mini-inland sea that offers the southern-most accessible safe anchorage in Australia. The nearest road, the nearest village with any shops is at least a hundred miles away by sea, and six days walking (tramping) by land.


Situated deep into the roaring 40’s, gale force westerly winds howl around this lower end of Tasmania for almost 200 days of the year. However, today the winds have been benign, blowing freshly for a few hours at mid-day then dying off completely as the afternoon wore on. The sunlight warmed the sheltered cockpit enough so that we had little hesitation in stripping down and using our improvised shower for a through body and hair wash. Today I find it hard to believe the northern tip of Antarctica is just 600 miles to the south,

It is interesting to note the psychological change that comes from having reached this self-set goal. David and I had begun planning for this almost from the minute we decided to set sail together. We’d left Kawau just under a year ago (six months after that first discussion) ostensibly, to get to Townsville in Australia by late August so David and his far-flung trio of daughters could meet up to celebrate the end of his 11-year circumnavigation in the port from which he’d first set sail. That voyage through Fiji and on to Vanuatu though marred by two accidents, one that saw me break five ribs, one that saw a 200-foot ship break loose from its mooring in a storm and crash into Sahula, had been a good one. The reunion in Townsville, heart-warming. The late winter months spent exploring the Whitsunday Islands, which were David’s old sailing grounds, flew by. But, the lure of our Tasmanian goal, the need to be there for the late summer months so we might have favorable winds and less than brutal weather, always lurked at the back of my mind.


Three weeks ago, we had left the bright lights and amazing Wooden Boat Festival in Hobart to work our way south so we were as close as possible to the southeastern tip of Tasmania. Cold southwesterly winds and squally showers blasted us. Sahula’s heavy woolen winter blanket took up residence at the foot of the bunk. We meandered slowly southwards stopping at half a dozen little coves. The farther south we went, the smaller the settlements, the hardier and more self-reliant the inhabitants. We enjoyed each stop along the way but didn’t linger as “the goal” lay heavily on our minds.

We were not the only sailors’ intent on being poised to make the dash around the bottom of Tasmania. By the time we lay at anchor in Recherché Bay, the southern-eastern most anchorage that could shelter us before we made the dash around the bottom, eleven other yachts were there waiting for a break in the weather too. I must admit to feeling a bit perturbed that, what to me had felt like a real adventure, was being slightly diluted by now being part of a fleet. Finally, the westerly winds did lay down, and then slowly back to the south and forecasts were for 24 hours of potentially fair winds. We set sail and so did the crews of three other boats and once out into the Southern Ocean, we soon lost sight of each other. Feeling very much on our own, we reached past mile after mile of desolate wave-smashed cliffs. Heavy swells made for a seasick inducing motion as they lifted and dropped Sahula three meters or more. The sense of accomplishment that makes any adventure worthwhile came after a headlong dash before 25 knots of wind. It was well after dark when we worked slowly into a safe anchorage after rounding first Southwest Cape, then Maatsuyker Island – the southernmost bit of Australia - and finally the Pyramids, three spikey rocks that grace the entrance to Port Davey. The next day we entered the amazing isolation of the Bathurst Channel.

Since then the few yachts that made it around to here have dispersed into some of the dozens of interesting coves throughout this huge protected area. We have this perfect anchorage completely to ourselves.
So now, we’ve done it. Reached our goal. David has already gotten out his mountain climbing gear, gaiters, heavy boots, and rucksack. I have charged up the hand-held VHF he’ll carry. Tomorrow he plans to be up by 5 AM to pack up and motor the little dinghy across the mile wide channel then climb 800 meters to the top of Mount Rugby. According to the guidebooks, this is rated as a “difficult 5 hour to 7-hour climb with rock climbing experience helpful…” I know he’ll come back scratched, tired but elated. Meanwhile, I’ll have spent the day being totally lazy. I’ll monitor the VHF and cheer David on when he calls, as we’ve arranged, as soon as he reaches the saddle before the rugged rock climb at the very top. I’ll probably do a few small jobs around the boat, maybe write a few letters, finish this newsletter but mostly I’ll just soak in the sense of accomplishment that reaching goals under sail gives me.
And when the mountain climb is finished, when David has had a chance to see the view from yet another mountain he has climbed, a view listed as “the finest in Tasmania, if not the world,” I know exactly what will happen. Impatience will set in. Instead of relaxing and meandering around this isolated waterway until we truly run out of food, until winter threatens, something we probably should do because we might never be here again, both of us will start watching the weather for our break. We will rush to take Sahula back to Tasmania’s east coast, find a safe place to leave for her, then head for my Kawau Island home. There I look forward to settling in to do some serious writing again, inspired and fired up by the time I’ve spent voyaging along the challenging and wild southernmost reaches of Australia.

P.S. My time in New Zealand has been spent putting the final additions into the 3rd edition of the Self Sufficient Sailor. I’ve added 9 new chapters which tell of the lessons we learned from sailing to windward past Cape Horn and onward. I have also updated and expanded the original chapters. It is off to the editors right now. Goal is to have the book ready for the Port Townsend Wooden Boat festival and Annapolis Sailboat Show. If you would like a signed copy but will not be attending either of those shows, my publisher has offered to make special arrangement, but only on books ordered through this website. You would have to let us know by September 1. Click here for details. Note, the Self Sufficient Sailor 3rd edition will not be available elsewhere before November.
Email ThisBlogThis!Share to TwitterShare to FacebookShare to Pinterest
Newer Post Older Post Home 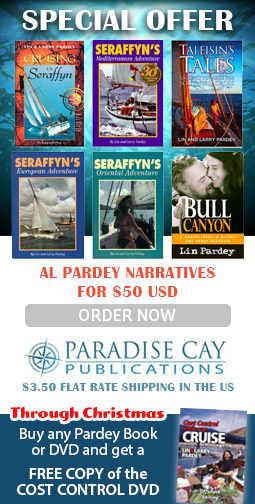